Developing large-scale commercial properties is a fiendishly complicated process. It involves working closely with investment partners, prospective tenants, financial entities, contractors and multiple units of government to keep complex projects on track for timely completion. And it requires each of those entities to have confidence in the developer’s ability to deliver.

For Pittsburgh’s Elmhurst Group, which owns and manages approximately 2.5-million square feet of office and industrial space in southwestern Pennsylvania, maintaining a solid reputation for delivering on projects is paramount. It’s reflected in the title of its corporate brochure: “Getting it done.” And its leadership takes that status in the development community very seriously.

“Our whole real estate portfolio is within the Pittsburgh market,” Elmhurst CEO William Hunt explained. “We have a reputation here. We work with the Union Pension Fund. We have a lot of contacts and relationships in Western Pennsylvania. It’s always been our theory at Elmhurst: to create value by using our relationships and our ability to accomplish what others could not.”


The Elmhurst Group’s outstanding connections and credibility were earned over a long period of time. Although the company itself has been around for 30 years, its roots go even deeper. It is the direct descendant of one of the region’s most prominent families - William Hunt’s great grandfather, Alfred, co-founded Alcoa more than 100 years ago. As a result, the family’s connections to influential people and institutions in the region are unmatched. Even the investment group’s name, Elmhurst, is taken from the family’s former stately homestead in Oakland.


Real estate projects currently in the company’s portfolio include the RAND Corporation building in Oakland, three business parks in the airport area, office buildings in Monroeville and Pittsburgh’s north shore, as well as the Doubletree Hotel downtown - which also serves as the Group’s headquarters. But it will soon include three new commercial buildings in Cranberry: an office building in Cranberry Crossroads, and twin office/warehouse buildings in RIDC’s Thorn Hill Industrial Park.


It’s not the Group’s first venture in Cranberry; years ago, when it was still involved in residential housing, Elmhurst built the Winchester Farms and Winchester Lakes subdivisions near Unionville Road. But today the company’s sole focus is on commercial development, and Cranberry is generating considerable interest as a site for new business expansion. 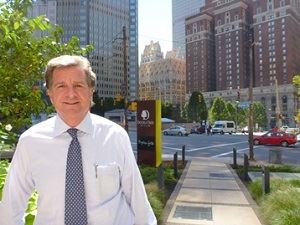 
Getting it done. CEO William E. Hunt’s Elmhurst Group, with headquarters in its Doubletree Hotel downtown, owns and manages approximately 2.5-million square feet of commercial space in and around Pittsburgh. Soon, it will have nearly 200,000 more in Cranberry Township.

“I think Cranberry has done a very good job of stepping up,” Hunt said. “They did whatever they could to make sure planning was a major part of whatever happens in Cranberry. And that’s laudable. We’ve talked about Cranberry being a high growth market for a long time. But I think it’s moved up to another level during the last three or four years. You’ve got to have planning, and if you’re consistent with your planning over time, it should work out. And I think Cranberry’s proven that.”

“I am currently national chair this year of the real estate trade group, NAIOP. So I’ve travelled all over the country and I talk and listen and meet with other developers. And one of the things I’ve learned is that 15 years ago, there were a lot of towns that said “Let’s just be residential - we only want homes, nobody wants retail; put it somewhere else. Our tax base will pay for itself.” But over time, most communities have come to realize that the really successful ones have live/work/play. It all needs to be tied together; it can’t just be residential.

“There’s an old Yogi Berra line about restaurants: ‘Nobody goes there anymore; it got too crowded’,” Hunt noted. “There’s a little bit of that in Cranberry, too. People say ‘Oh, 228 is so crowded.’ Well, people still love it. They’re going to all those restaurants, they’re loving the activity. I go up there and I feel like I’m in a new city. It’s refreshing.”
Twp. Home
Government Websites by CivicPlus®
SERVICES
PUBLIC SAFETY
PARKS & REC
GOLF COURSE
BUSINESS
LIBRARY
[]